Mount Mulligan is a small summit, mostly forested except where logged (and quite extensively!), just southeast of Squamish. Unlike the Red Heather area to the north, this area sees a lot less skier traffic, and more snowmobile traffic, as the access road is not plowed, nor is it in a park. However, the area offers a straightforward ascent, with some easy open skiing on smooth cutblocks.

On Christmas Day, I found myself in the snowy Apron parking lot, wondering where my friends were. Greg and Lisa were in Squamish picking up their friend's dog (Sky) and we were going to meet to go and ski Mulligan. "I'll meet you at the Apron parking lot." "Where's that?" "Right by the Chief." "Sorry Rich, you'll have to be more specific than that." Sometimes, I forget that not everybody is a climber.

Christmas day would have been awesome for skiing on the North Shore, but Greg and Lisa were up in Squamish for a dinner that evening. It was probably good to break up the North Shore skiing streak. Greg and I had skied Hollyburn the day before, and we would ski St Marks the following day, and then Hollyburn again after that. Ski conditions on the North Shore had been spectacular in late December, and it was hard to convince me to ski anywhere else. I found myself that morning, driving past the Cypress exit, wondering why I was driving further to worse snow!

The snowpack in Squamish was thinner in comparison. We drove up the icy Mamquam Main, where chains would be a good idea. The Mamquam Main is plowed up to the Skookum Power Project, but you don't need to go that far to get to Mulligan. The Mulligan spur road (M7) leaves the Mamquam Main at 6.8km, and branches off to the right, with an immediate switchback. The road climbs quickly, and depending on the snow condition, you may want to just park at the turnoff. Greg drove the 4Runner up to 520m, where we started skinning from. There are not many spots to turn around on, so drive up the road at your own caution. You might piss off a snowmobiler or two if you pick a poor spot to park.

Snow conditions were pretty poor on the road. An inch of breakable crust at the lower elevations. The road only has a brief flat section, and otherwise climbs all the way up to 1200m, with a big cutblock ending at 1350m. From the end of the road, you can either ski up through the big open cutblock towards Mount Mulligan, or continue following the road towards the Mulligan-Anif col. Getting to the col is steep, but Anif Peak is a more open summit with good views of the Sky Pilot Group. There are some nice steep north facing bowls in complex terrain, to ski on both Anif and Mulligan.

Fortunately for us, the snow quality improved as we climbed up the road. Low density boottop powder sat on top of the firm crust. I don't know how busy this road gets on a normal weekend, but being Christmas day, it was completely quiet. This was also part of the reason I came here today. I figured most people have other plans today. We stopped for lunch just below the cutblock, and there was only one other skier who came by.

We headed up into the big cut block. If you look at the area on Google Earth, you will see that almost all sides of Mount Mulligan has been logged, save for the last 200m elevation band below the summit. The snow was probably as good as could be for this type of terrain. A big open green run, thanks to recent logging. There were only a few stumps that broke up the otherwise planar slope, no more than twenty degrees. I broke trail up towards the summit, enjoying the open trees leaving the cut block, and the boot-top powder over top of the firm crust. Greg and Lisa stopped just below the summit, while I continue up to get some more views of the Sky Pilot area. It started as a sunny morning, but the clouds associated with the next weather system moved in by the early afternoon.

I skied back down to Greg and Lisa, where we celebrated Christmas by enjoying the apple crumble pie that I carried up. Greg also hauled up a full growler filled with hot chocolate and schnapps to go along with the pie. It was easy skiing through well spaced trees back to the cut block. You could actually continue skiing further down the trees along the northwest ridge, but we headed back out into the cut block.

The snow was just perfect for these conditions. Fast, light, blower powder. It was hero snow, but not too much of it. We had fun skiing down the gentle slopes, where any more snow, or heavier snow, would be a slow descent. The ski down to the truck is quick, as the road is almost all downhill, with a very short section of skating. I only took off my skis once near the bottom, on a steep hill with a surface of ice and gravel.

Mount Mulligan seems like a great place to go if you're looking for some easy ski touring with good views, and as a nice alternative to Red Heather. From the end of the road and up to the summit, there are really great views of the Garibaldi area, the Tantalus Range, Skypilot, Howe Sound and Mamquam Mountain.  I'm not sure how busy this place gets with snowmobile traffic during the winter. While we were up there, there were only two other snowmobiler-skiers up there on Christmas day. Later in the year, or in early season, you should be able to drive further up the road. This is a quick trip, with most of the time on the ascent up the road, and hopefully a fast easy glide out back down. 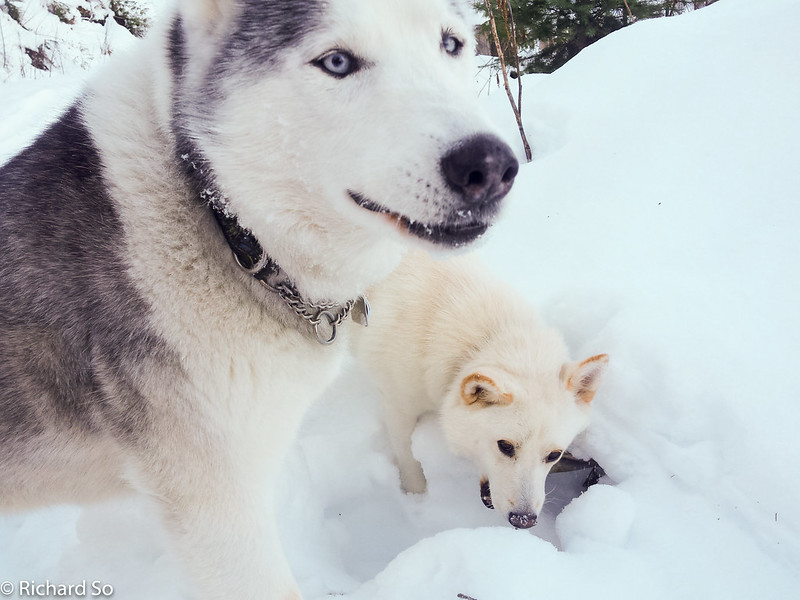 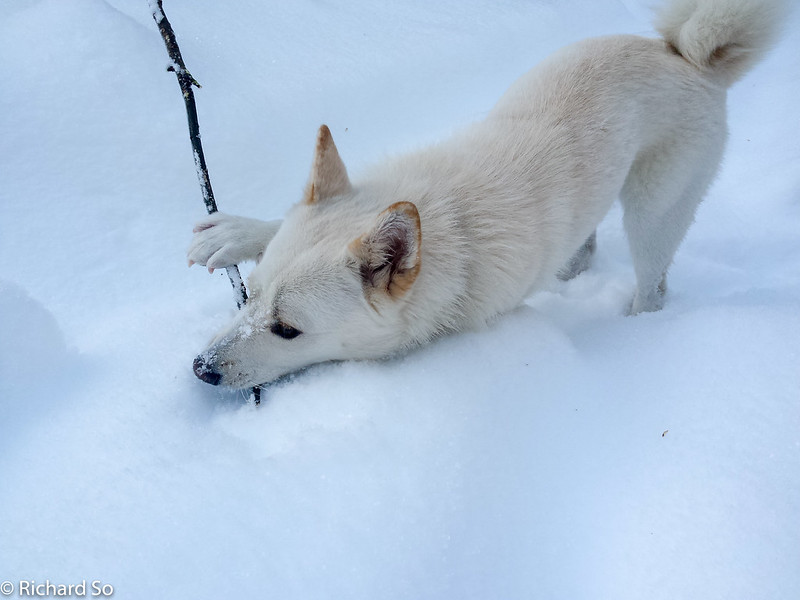 In case you can't tell, Chilko really loves sticks. He would have been a good asset last year when I was helping out with the Lizzie Creek road trailwork. Hey Chilko! Don't poop in the skintrack =) 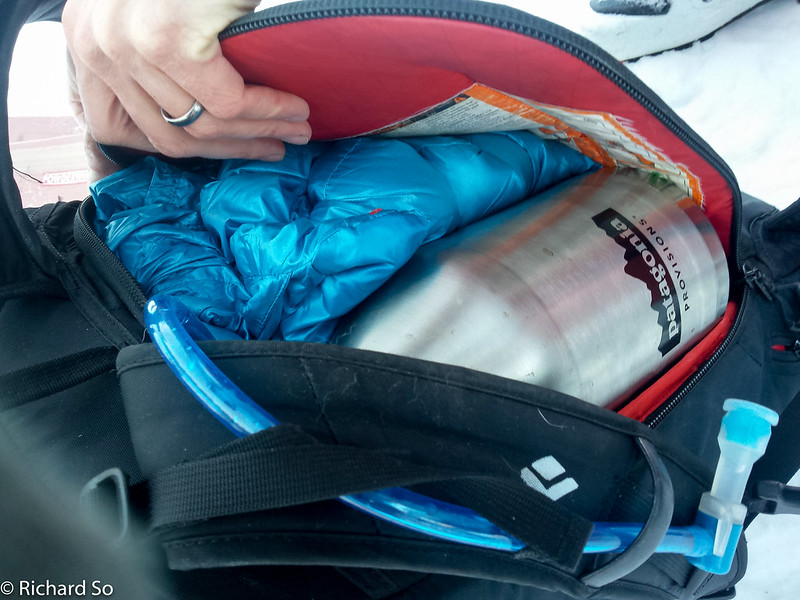 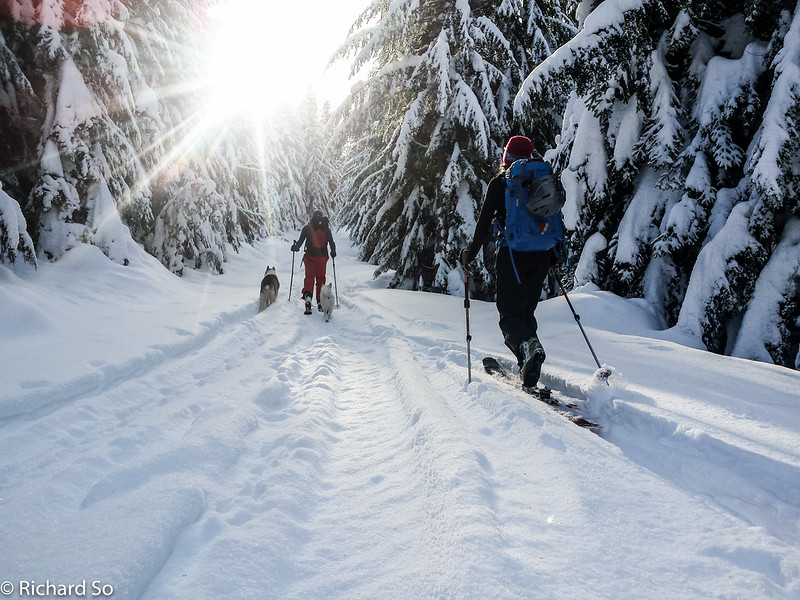 Heading up the logging road, with some old snowmobile tracks 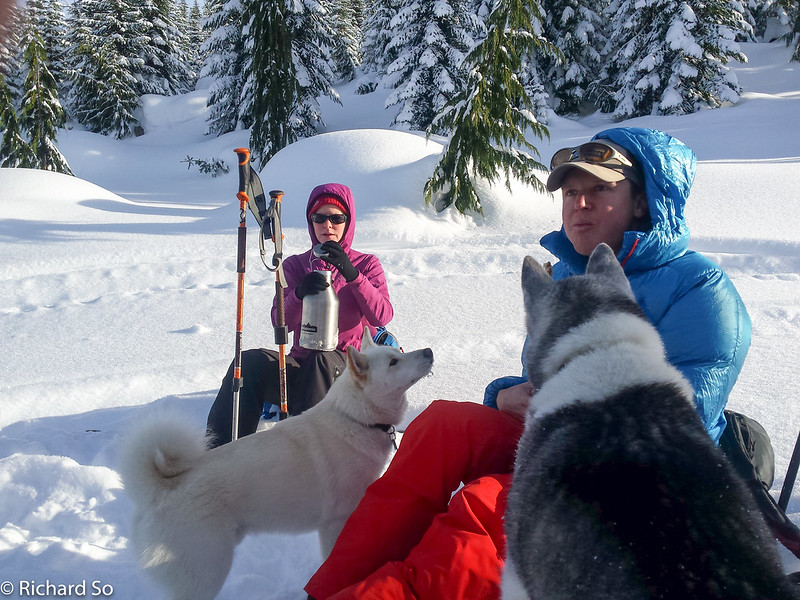 The dogs are less interested in the hot chocolate 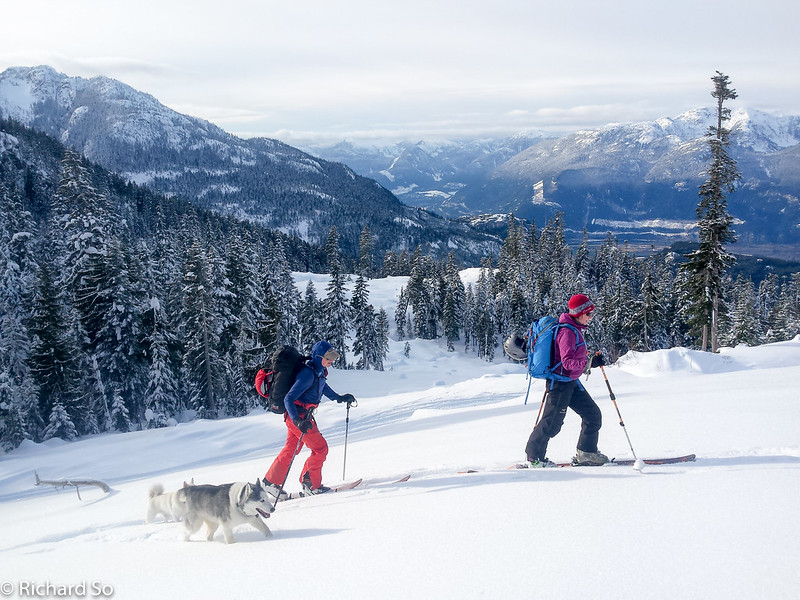 Heading up through the wide open cutblock with a view of the west side peaks of Howe Sound. Mount Murchison is on the right. 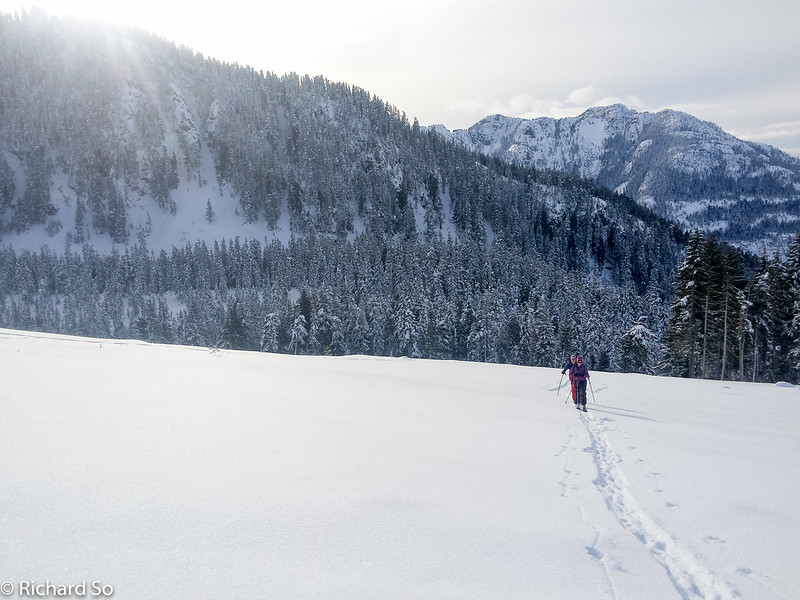 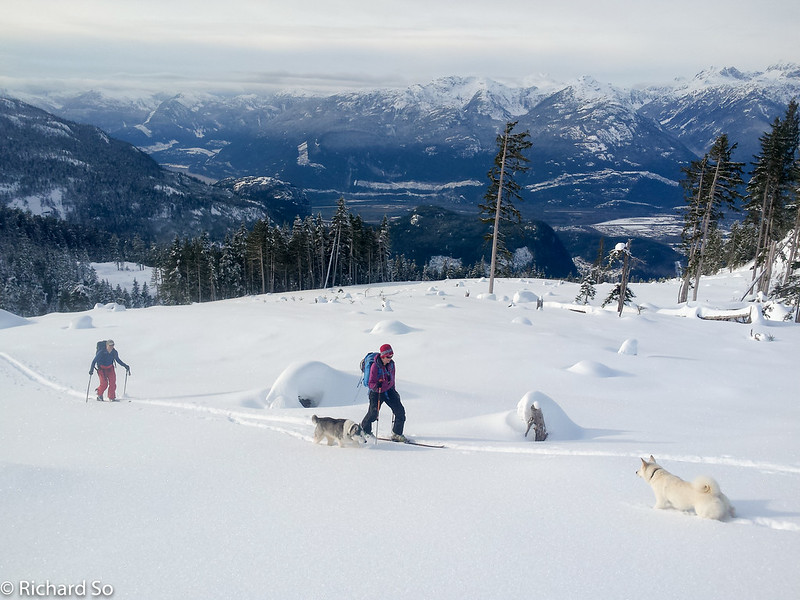 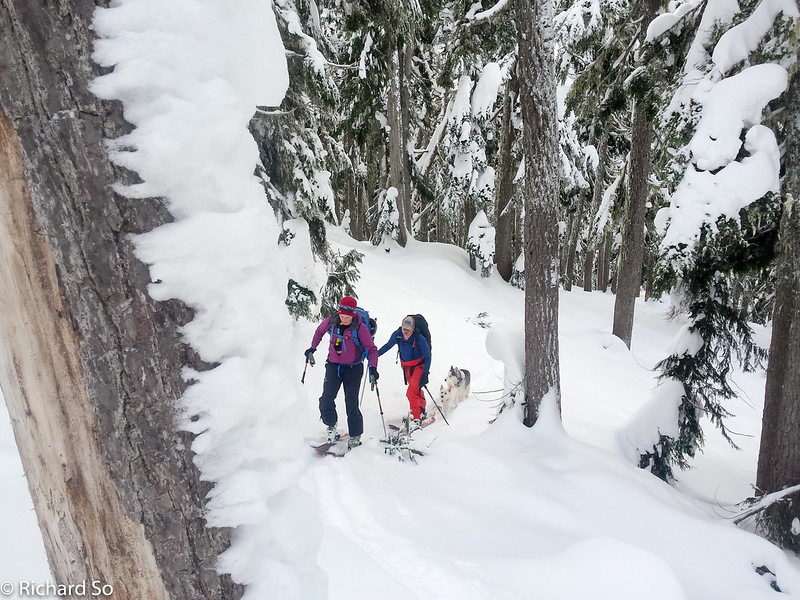 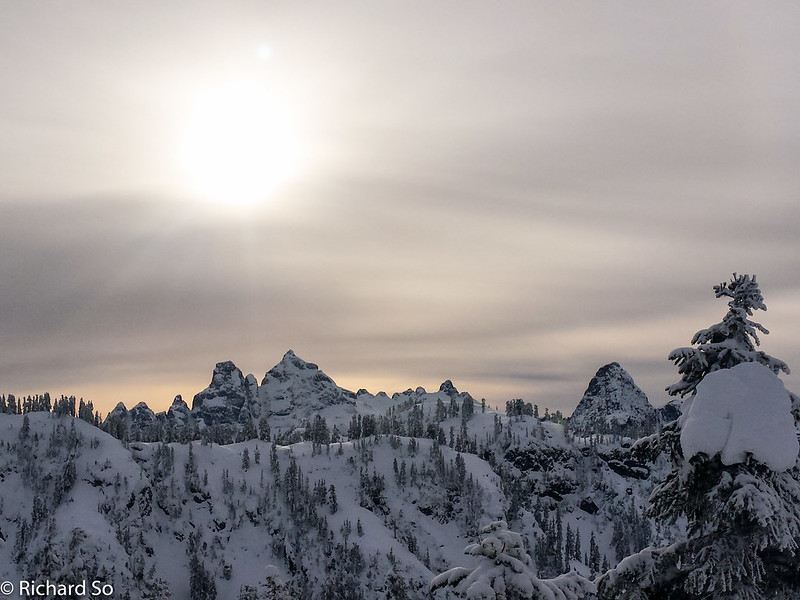 Sky Pilot and Habrich, with clouds rolling in from the south 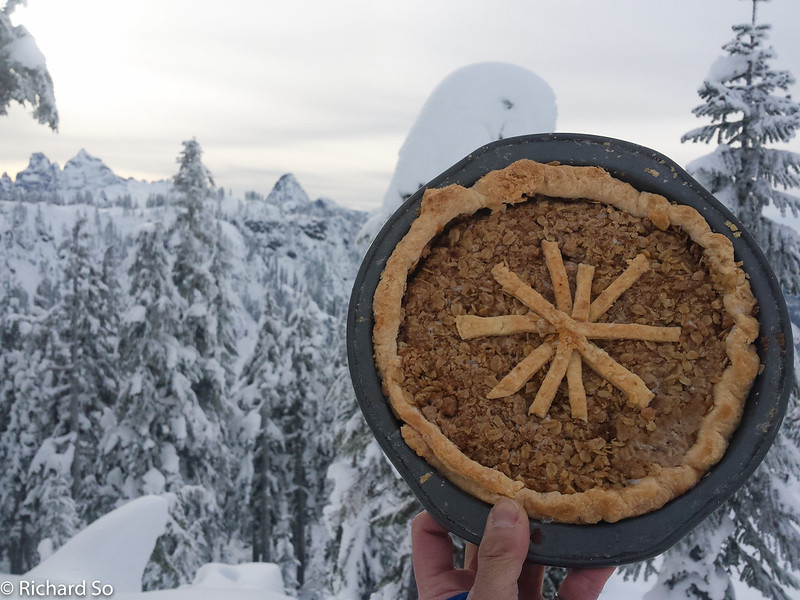 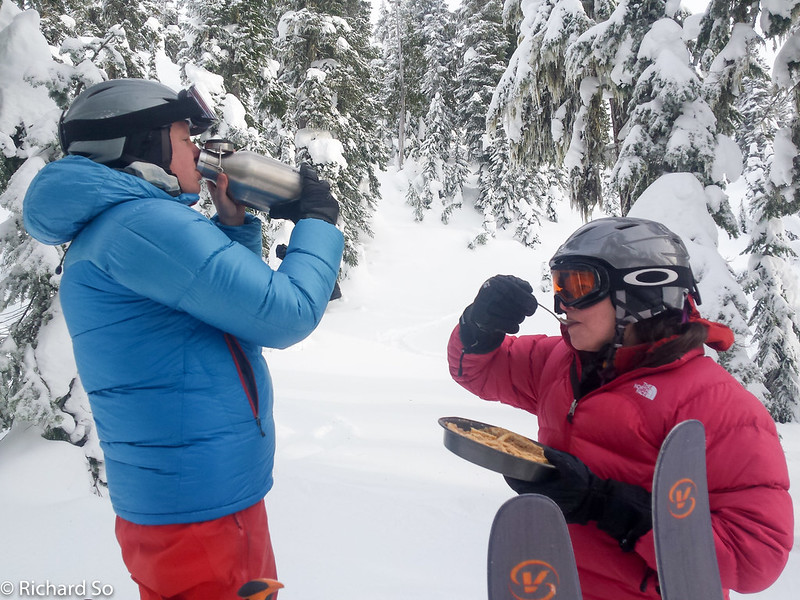 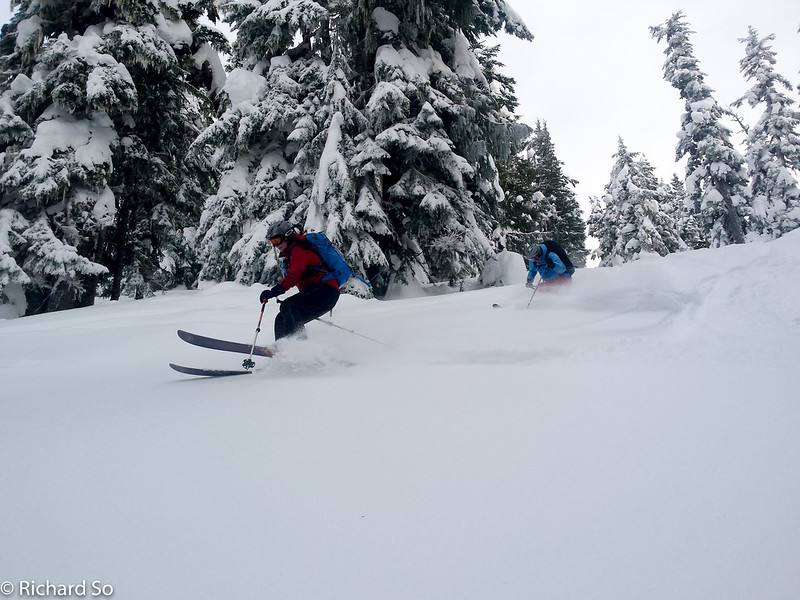 The "Team Slash" photo. As you can tell from above, Greg has far more experience in "working" the turn for the camera. 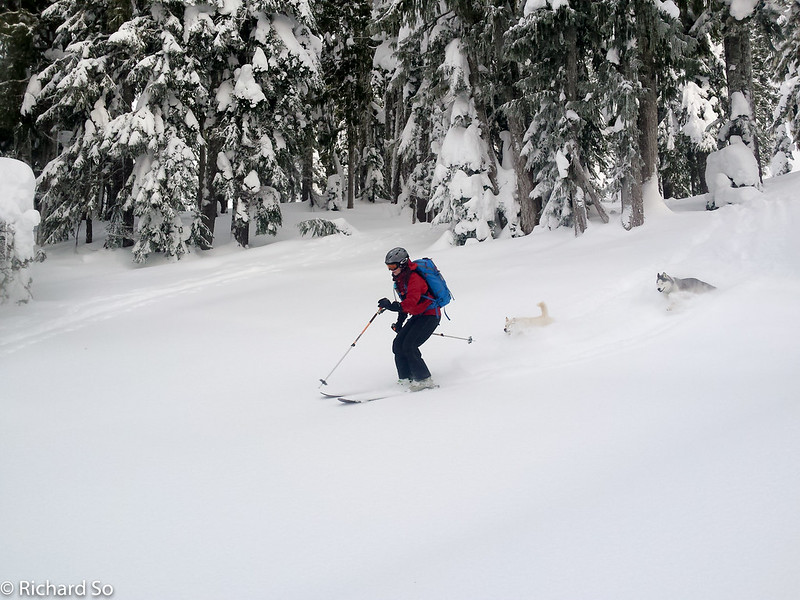 Lisa leads the pack down 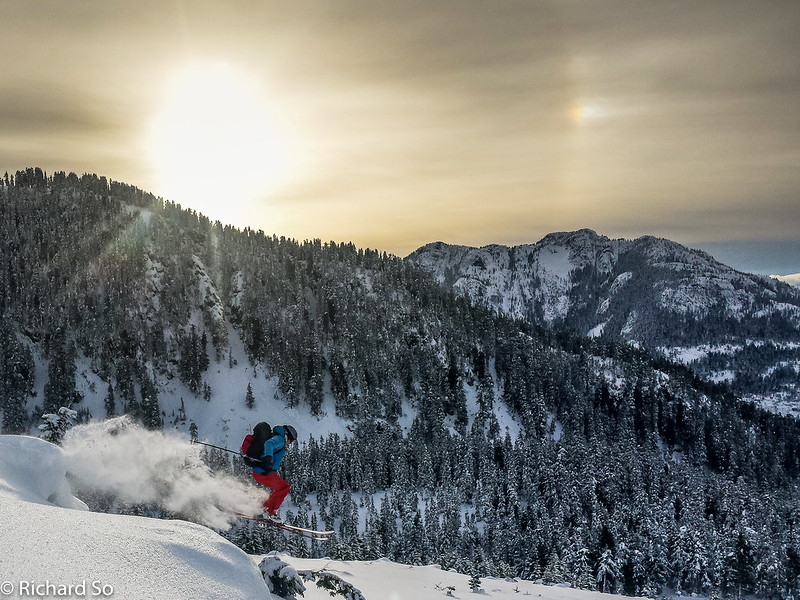 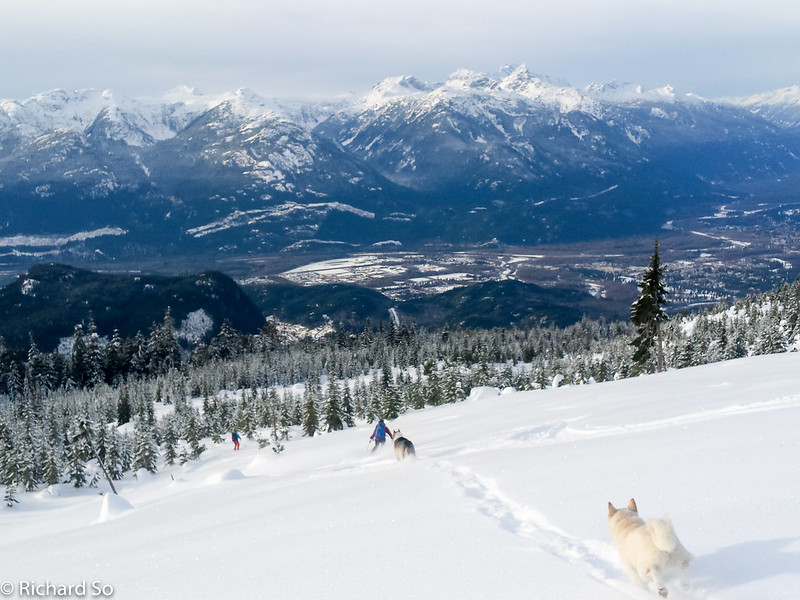 Lisa skis towards Squamish, with the Tantalus Range above 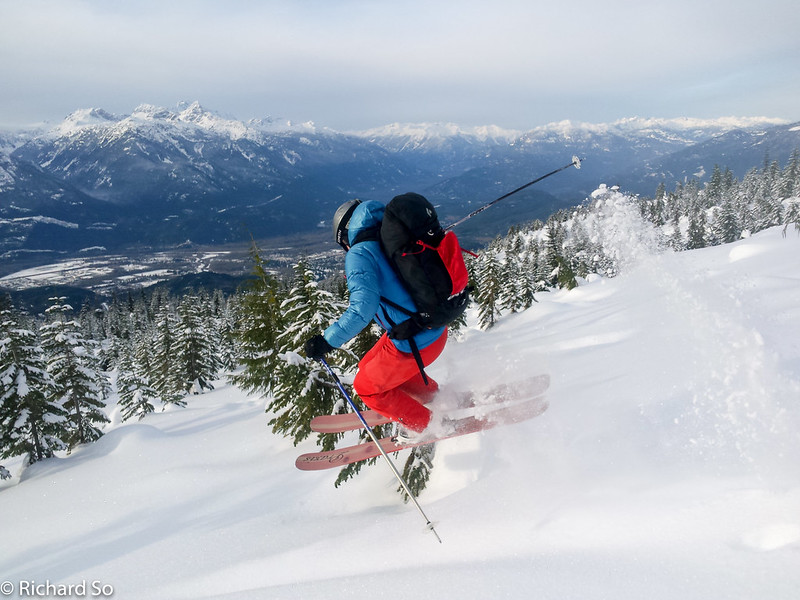 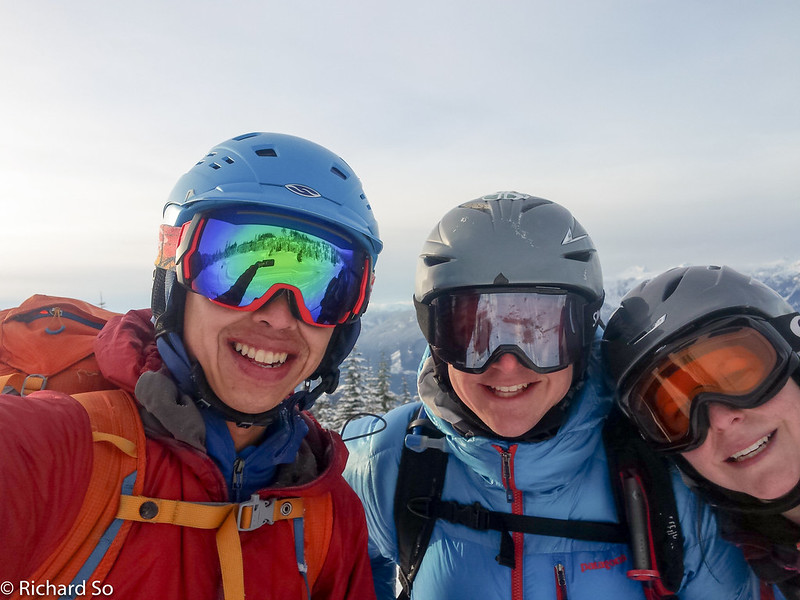 Great day in the Squamish backcountry!
Posted by Rich So at 12:55 PM 6 comments: